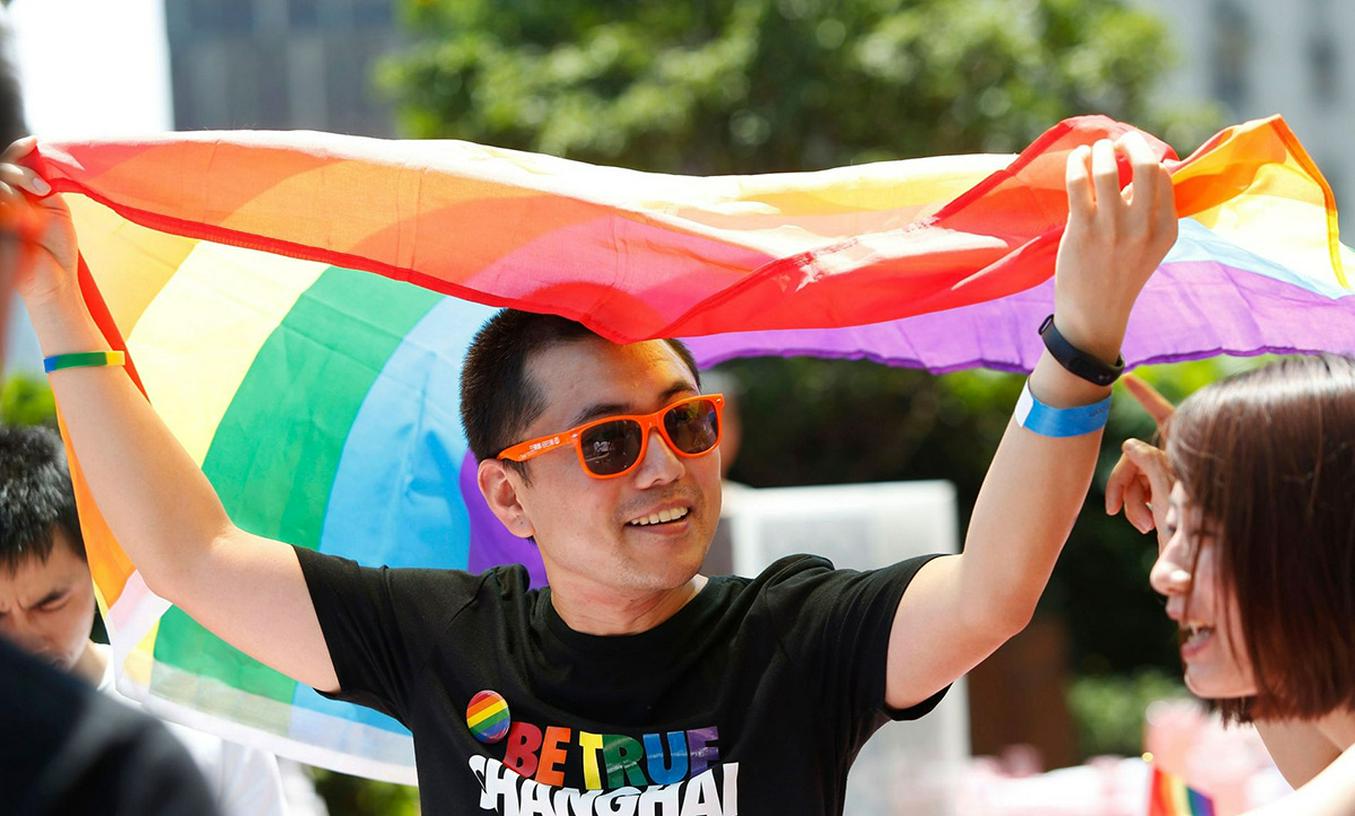 The issue of LGBT rights has emerged in public debate in China in recent weeks. At the end of last year, a spokesman for the legislative affairs commission of the Chinese parliament stated that it had received petitions from the public to include the legalisation of same-sex marriage in the new Civil Code currently under preparation.

It is currently unclear whether the proposed amendments (sent in to the parliament by activists during the course of public discussion of the new code) will find their way into the new document. Human rights defenders admit that even if the authorities do consent to changes, the legalisation of same-sex marriage could still take years. The parliament’s speaker also recently announced that the official position on marriage remains the same – that it can only be a union between a man and a woman as this “suits our country’s national condition and historical and cultural traditions”.

Nevertheless, the government is acknowledging that such proposals have been received (the news was published in the official press), and LGBT rights advocates consider this in itself a major success. “I know it's just a proposal and it's most likely not going to be realized in the near future,” said Gao Qianhui, an activist from Shenzhen, “but the fact that this topic is now publicly and officially on the table gives the LGBT community hope for the first time after years of hiding and struggling.”

According to Timothy Hildebrandt, docent in sociology at the London School of Economics, the Chinese government may use the issue as a way to improve its human rights image following the widespread criticism it has received for its treatment of Muslims in Xinjiang and the suppression of protests in Hong Kong. In the opinion of Hu Xingdou, an economist from Beijing, it is ultimately globalisation that lies behind China’s shifting stance on the issue, meaning that the country “cannot but take into account the changing legal systems in other countries and will try to join the global mainstream."

At present in China, however, regardless of the fact that an official ban on homosexual relations was abolished many years ago, members of the LGBT community frequently meet with discrimination and stigmatisation. Many of them even have to deal with the efforts of others to “cure” them.

Modern science does not consider homosexuality an illness requiring medical treatment. Yet in many countries, including China, the notion and practice of “curing” homosexuality – extremely dubious from a scientific standpoint – nevertheless exist. According to a recent report prepared by the organisation Public Interest Law Center on Equal Rights for LGBTI, around a hundred clinics and medical centres operate in the country, at which attempts are made to “treat” gays and lesbians.

Treatment is frequently forced on the individuals in question, and is sometimes downright dangerous (among the methods employed are hypnosis, electroshock therapy and even various esoteric procedures). But according to rights advocates, the government turns a blind eye to such practices.

In Chinese history, attitudes to homosexuality have been ambiguous. At one time, same-sex relations were common – including among aristocrats and government officials. As historians have pointed out, for a long time the general attitude remained tolerant. The continuation of the family line was considered one of a man’s key duties, but as long as he married and fathered children, homosexual activity on top of this was generally allowed.

Under the Ming Dynasty (16th century), a law was adopted banning sexual relations between men, but the law did not lead to any major changes in society. The situation changed significantly under communism, however – during the Cultural Revolution, homosexuals, like other “undesirable” groups, were subjected to persecution. Later on, despite the absence of a ban on homosexuality in the country’s criminal code, the Supreme Court of the People’s Republic of China ruled that it came under the rubric of “hooliganism” (the ruling only concerned anal sex between men, sexual relations between women were never criminalised). This ruling was only repealed in 1997. 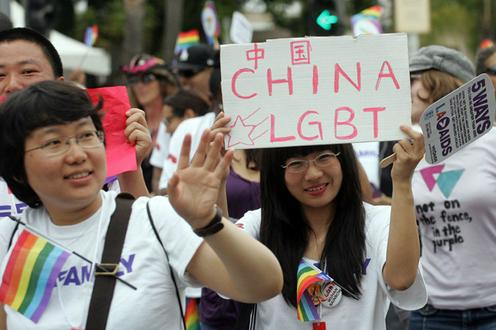 Today the LGBT community in China is estimated to number tens of millions of individuals – comparable to the population of a medium-sized country. The sector of the economy geared towards the LGBT population is valued at $300 billion a year (putting China in third place globally, behind Europe and the USA). Businesses are aware of its significance – some of them have supported the yearly Shanghai Pride festival, and a few years ago a competition (organised among others by Alibaba, China’s biggest company) was held in which a number of gay couples won a trip to the USA, where they could get married.

At the same time, in a survey conducted among the Chinese LGBT population a few years ago by the UN, over half of respondents complained of discrimination (including at work) and unfair treatment. Almost all of those questioned – 95% – said that they hide their sexual orientation from others, most of them even from their own families.

In the past, homosexuality was often seen by the healthcare profession as an illness that could be cured (“reparative” or “conversion” therapy was based especially on psychoanalytic methods). Later, however, mainstream science rejected such approaches. In the 1970s, the American Psychiatric Association removed homosexuality from its list of mental illnesses. At the start of the 1990s, it was also removed from the World Health Organisation’s list of diseases.

This type of “therapy”, however, was only outlawed in a few countries. As a result, in spite of its dubiousness from both a scientific and an ethical point of view, the practice continues to exist. According to a report published last year by the rights organisation OutRight, it is currently carried out in at least 80 countries around the world. Even in the USA, where LGBT rights are generally staunchly defended, conversion therapy is still being performed. According to the University of California, such “therapy” is carried out both by doctors and by religious figures. Only in a few US states is the practice banned.

This “therapy” can be accompanied by physical violence, forced fasting and even exorcism. Some methods, as already pointed out in the report by the UN, are equivalent to torture.

In China, homosexuality was removed from the official list of mental illnesses in 2001. But views of it as an illness – both within the medical and the academic communities – have largely been retained. This can be seen in a number of textbooks which, according to a report by one LGBT organisation, are still in use at Chinese universities. A few years ago, a student from Guangzhou took the Education Ministry to court over one such textbook in psychology, but lost the case. An activist from the Beijing LGBT Center recounted that she had come up against the same problems at her university – in an argument with her psychology professor, she referred to the APA’s handbook of psychopathology in use in the USA (from which homosexuality was removed long ago). “It’s not important what they teach abroad,” she was told in reply, “in China it is considered an illness”.

This is one of the stories contained in a report by Human Rights Watch on gay conversion therapy in China. Labelled “aversion therapy”, the method seeks to instil the association of an unpleasant feeling with what is considered a harmful habit. To this end, nausea-inducing medication is employed, or electric shocks.

In general, it is the parents who insist on such “therapy” after discovering the sexual orientation of their children (some even forcibly transport their offspring to hospital). Such actions are attributable not only to a general intolerance of homosexuality, but also to the meaning of the family in China, especially among the older generation. Traditionally, the continuation of the family line has been considered a duty towards one’s family. As one Chinese proverb puts it, refusing to produce offspring is “disrespect towards one’s parents and ancestors”.

The situation has been further compounded by the one-child policy that was only abolished in China in 2015. “You only have one child, so you want your child to be as ‘normal’ as everybody else,” remarked Wei Xiaogang, executive director of the Beijing Gender Health Education Institute. All this has ensured the presence of a demand for clinics promising a “cure”. 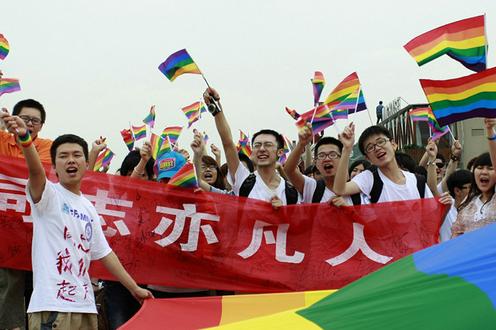 According to Human Rights Watch, this demand is catered to by both state-run and private clinics, including a number which practice traditional Chinese medicine. Some use dubious medication, some hypnosis. Others go even further. An employee at one clinic in Nanning in the south of China stated that homosexuality is “guilt left over from past lives” (for a course of hypnosis that claims to rectify this, the clinic charges around $200). In one case, a young man was offered a collagen injection – they promised him that this would alter his sexual orientation in just a few days (the cost of this “cure” was to be around $1,500). Another clinic in Beijing told him that the cause of his homosexuality was the spirit of his dead parrot, which had been haunting him and forcing him to feel attraction for men. An employee at the clinic conducted an exorcism séance for the man, replete with spells and incantations, and then handed his “patient” a talisman, to be kept with him at all times. And in case that didn’t work, he prescribed some traditional Chinese medicines.

Several years ago, an LGBT activist whose parents had forced him to seek help from one of these clinics took the clinic to court – and won his case. The court ruled that the treatment, which included electroshock therapy, was “ineffective” and the promise of a “cure” for homosexuality was false advertising. Later on, a court in the central province of Henan decided against another clinic which had forced its “treatment” on a patient. The clinic was made to pay compensation. However, medical centres continue to advertise this kind of treatment. A journalistic investigation published at the start of last year confirmed that such clinics operate in a number of major cities in China, including Chongqing (one of the country’s largest metropolises) and Zhengzhou (the capital of Henan province).

The clinics assure that their methods are effective. Yet the World Psychiatry Association has stated that conversion therapy has no scientific basis, can be dangerous, and helps to spread prejudice. However, as Xin Ying, head of the Beijing LGBT Center, points out, many of those who are taken to such clinics lie afterwards, saying that they are “cured” in order to be left in peace. “They lie to their parents and their doctor,” she said, referring to the testimony of scores of individuals. “But it's not because they were cured – it's because they didn't want to experience [again] the pain of being treated.”