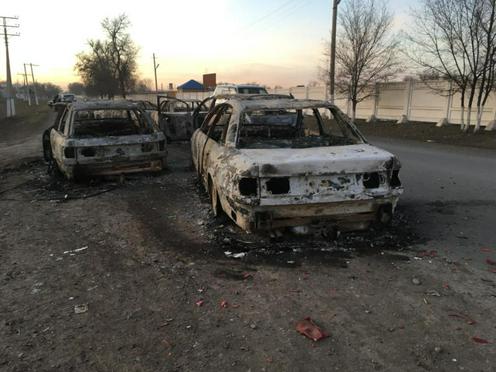 The aftermath of the riots in one of the villages. Photo by Bagdat Asylbek

The number of those killed in clashes that broke out in the south of Kazakhstan in the night between 7 and 8 February has risen to 10 people, Khabar 24 reports (in Russian), citing information from the operations centre set up to deal with the crisis.

According to Kazakh news agency KazTAG, two of those being treated for injuries passed away in hospital. Official sources had earlier reported eight deaths. A list of victims has been published.

27 patients are currently still receiving treatment at the central hospital in Korday district, where the majority of the injured were taken. According to official information, a total of 165 people received medical care following the violence, the majority being treated at the scene. Most of those still in hospital are being treated for gunshot wounds. A number of patients with particularly serious injuries were airlifted to Almaty. In total, according to Tengrinews, 39 people remain in hospital.

Many residents of Masanchi (a small town in the Korday district of Jambyl region that was at the centre of the troubles) and nearby villages fled the violence into neighbouring Kyrgyzstan. Khabar 24 reports that several settlements, including Masanchi, are practically deserted.

Yesterday, Vice President of Kazakhstan Berdibek Saparbayev, who is in charge of the governmental commission set up to restore normality in Korday district, called on those who had fled their homes to return, promising to “re-establish order”. He also stated that residents whose homes had been burnt down could receive compensation, provided they are able to present the necessary documents.

According to BaigeNews, by the morning of 9 February, dozens of Kazakhs had already decided to return home. The previous evening, however, Kyrgyz news agency 24.kg reported that several hundred people, mostly women and children, were still waiting at the Keng-Bulun border crossing, hoping to cross into Kyrgyzstan.

On 8 February, reports circulated that around 4,000 individuals had crossed the Keng-Bulun border point that day, though it was not stated whether this represented a larger flow than usual. The same day, Kyrgyz news website Kloop.kg, citing unofficial estimates from sources on the border, wrote that the total number of people arriving in Kyrgyzstan may be around 10,000.

In Kyrgyzstan, efforts have been made to provide humanitarian assistance to the victims. Members of the local Dungan community (the disturbances in Kazakhstan occurred in an area with a large Dungan population) are providing shelter for the refugees in their own homes.

The conflict in the Korday district of Jambyl region erupted on the afternoon of 7 February. Its precise cause remains unknown. According to official announcements, the clashes began as a private dispute between residents of a couple of villages in the area. By the evening, as local resident and chairman of the Dungan Association of Kazakhstan Husei Daurov told the media, groups of people began arriving in the village of Masanchi (which has a 90% Dungan population) and started attacking local residents and setting houses and vehicles on fire.

Initially, the authorities stated that the situation had been brought under control, but unofficial sources reported that the disturbances were continuing. Reports of an interethnic conflict spread on social media, though no mention was made of this in official announcements. The clashes then spread to a number of nearby villages. Only on the morning of 8 February, according to Daurov, was the situation truly brought under control following the arrival of the military.

During the course of the disturbances, more than 30 residential buildings and stores and dozens of vehicles had been severely damaged following widespread arson. Over 80 people were arrested on suspicion of participating in the events. On 8 February, however, after several hundred residents of Korday district blocked a major road, demanding the release of their friends and relatives, those arrested were set free. The head of the local administration stated that their participation in the disturbances had not been ascertained.

On 8 February, despite the stabilisation of the situation, a state of emergency was declared in Korday district.