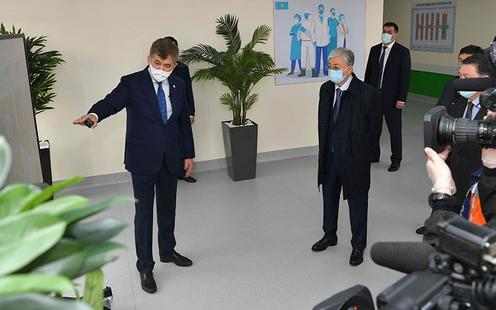 Kassym-Jomart Tokayev during a visit to the new infectious diseases hospital in Nur-Sultan. Photo by the press office of the Akorda

Kazakh president Kassym-Jomart Tokayev has decided to extend the current state of emergency in the country until 11 May. The text of Tokayev’s announcement was published on the website of the Akorda (in Russian).

Tokayev began his speech by arguing that the harsh lockdown measures implemented by the government so far had “to a significant extent” been successful, since the pandemic is not spreading exponentially. He also took the opportunity to list the support measures introduced to help businesses and the public. 4.25 million people have received financial aid (the reference is to the $96 per month payments given to those who have lost their incomes), 570,000 have received food parcels, and 1.6 million are to receive help paying utilities bills. Other aid is being distributed via donations to the “Birgemiz” fund set up by former president Nazarbayev and through work undertaken by the ruling Nur Otan party. Deferments have been granted on nearly $1 billion of consumer and business loans and over $2 billion of tax incentives offered to businesses, as well as cheap loans to small and medium-sized firms.

In order to ensure the situation remains under control, however, the current lockdown in the country will need to be extended. “This decision has been dictated by the current difficult realities,” the president said. “In accordance with the law, the national state of emergency will come to an end on 11 May, unless, of course, a new mass outbreak of the epidemic occurs. I hope that this will not happen.”

At the same time, he said, the state commission overseeing the national emergency is ready to relax lockdown measures “above all in regions and towns where the situation regarding the spread of the virus is under control”.

Tokayev added that the government is currently drawing up a list of businesses and organisations that will be permitted to reopen, as has already been done in Almaty and Nur-Sultan. In the first instance this will be industrial enterprises, construction and transport companies, banks and Citizens’ Service Centres. At the same time, however, employers will be required to ensure that sanitary regulations are observed and regional governors will bear personal responsibility for the whole process.

The Kazakh president also promised that the authorities would look into the question of reopening children’s playgrounds, and that flights between Nur-Sultan and Almaty are to resume from 1 May. Yet he emphasised that these partial relaxations should not be taken as a signal of a return to life as normal – shopping and entertainment centres, cinemas, restaurants, parks and other public places are to remain closed. Distance learning for schools, colleges and universities will continue.

The new announcements come several days after former president and “Leader of the Nation” Nursultan Nazarbayev called for the initiation of a programme to gradually reopen the Kazakh economy.

The first country in Central Asia to officially report cases of COVID-19, to date Kazakhstan has confirmed 2,791 infections and 25 deaths.