Violent clashes break out on the Uzbek-Kyrgyz border

On 31 May, residents of the Kyrgyz border village Chechme and the Uzbek village Chashma located in the So’x enclave (Uzbek territory located inside Kyrgyzstan – see map below) engaged in violent clashes, apparently over ownership rights over a local spring. It was reported that residents of both villages were working to clean the spring when a discussion broke out as to whether the spring belongs to Kyrgyzstan or Uzbekistan. Fighting broke out, followed by residents of the two villages casting stones at each other and several buildings being set on fire.

According to the Kyrgyz health ministry, 25 Kyrgyz citizens received medical attention after the incident, with four people requiring hospitalisation – two are currently in intensive care and two are said to be undergoing surgery. One unofficial report on the Uzbek side claims that 146 Uzbek villagers received injuries, including five or six people with gunshot wounds. According to official information from the So’x district authorities, 187 Uzbeks sought treatment at the district hospital, with 15 patients in a serious condition requiring transfer to the Fergana region’s central hospital. Three buildings are said to have been burned down on the Uzbek side. 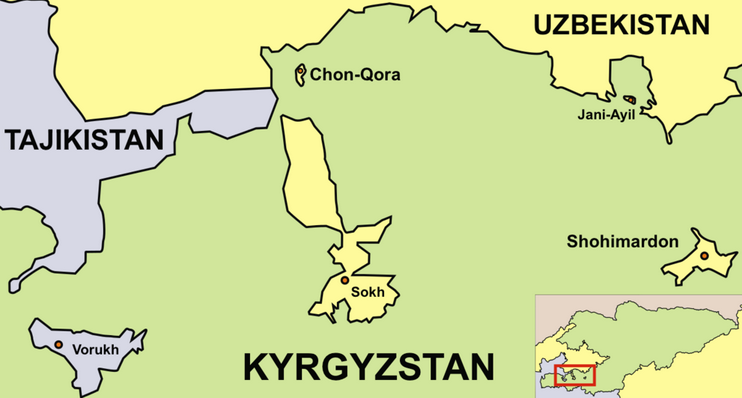 The Sokh enclave . Map from Wikipedia

Border conflicts over access to land and water break out regularly between residents of Kyrgyzstan and neighbouring Uzbekistan and Tajikistan, in large part due to the fact that major parts of Kyrgyzstan’s borders have not been definitively delineated. Of the country’s 976 km-long border with Tajikistan, for example, only 504 kilometres has been delineated and demarcated.

Just over a week ago, another conflict broke out on the border between Kyrgyzstan and Tajikistan, this time over grazing rights. The Tajik and Kyrgyz border services have exchanged angry recriminations and offered contrasting versions of the event. The Tajik side claimed that Kyrgyz shepherds illegally crossed the border and refused to leave and that Kyrgyz border guards subsequently opened fire, injuring a Tajik border guard. On the Kyrgyz side it is claimed that a Tajik shepherd had been illegally crossing the border with his for several days, and when Kyrgyz border guards asked their Tajik counterparts to stop this from happening, they were fired upon.

At the beginning of May, three Kyrgyz border guards sustained injuries following an exchange of fire with their Tajik colleagues.

Today Kyrgyz media have reported that a Kyrgyz citizen driving near the border with Tajikistan was shot in his vehicle by rifle fire coming from Tajikistan.

At the official level, the conflict on the border with Uzbekistan has been resolved more amicably. At their meeting, Boronov and Aripov expressed their mutual regret over what happened and agreed to carry out a joint investigation. Residents of the Kyrgyz village of Chechme, however, were angry that did not meet with them and familiarise himself with their complaints before going to see Aripov.

At a meeting between the Uzbek PM and local So’x district residents, the residents spoke of their issues with grazing rights and insufficient access to water. Aripov said that Uzbekistan has proposed turning the Chashma/Chechme spring (the common name of the two villages itself means spring) at the centre of the conflict into a recreation park, with equal access guaranteed to both sides.