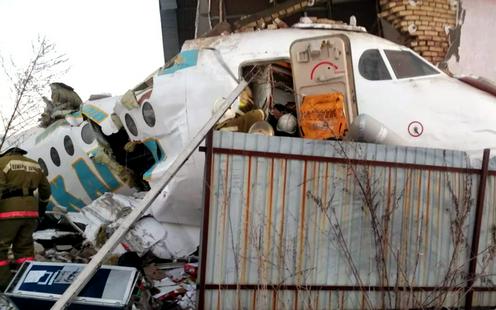 The crash site of Bek Air’s Fokker aircraft. Photo by the Committee for Emergency Situations of Kazakhstan

Kazakh airline company Bek Air, whose Fokker 100 aircraft crashed shortly after take-off from Almaty airport at the end of December last year, killing 13 people, forged documents showing that its pilots had undergone the necessary training to fly Fokker 70 and Fokker 100 aircraft. The forgeries were discovered in the course of the Kazakh Aviation Administration’s investigations into the incident, Tengrinews reports (in Russian).

Two of the company’s pilots completed a training programme in Latvia, but failed to pass the practical exam and received only a certificate showing that they had attended the course. Nevertheless, in order to receive clearance to fly, they presented forged certificates of their successful completion of the course to the regulatory body. The regulator is now considering withdrawing the certification of all of the company’s aviation personnel.

It was also discovered that Bek Air provided its pilots with fake certification of their completion of a refresher course on aviation safety and flying with dangerous goods. Investigations showed that while the relevant course and examination were being conducted, pilots had been on assignments in other regions of the country.

In addition, Bek Air forged aircraft maintenance documents to allow engineers lacking the necessary clearance to carry out maintenance work on its aircraft, and, also in contravention of procedure, failed to send operational data to aircraft manufacturers.

Another violation uncovered by investigations relates to an incident which occurred on 25 December 2019, two days before the fatal crash. On that day, during the course of the flight of one of the company’s Fokker 100 aircraft between Nur Sultan and Shymkent, the chief pilot discovered a fault in the plane’s hydraulics, after noticing that the plane was leaking hydraulic fluid. Such a fault can lead to a number of major technical failures, including the failure of wing flaps to deploy, and the loss of control over forward landing gear, elevators, ailerons, thrust reversers and other equipment. “Despite this critical situation, the chief pilot continued the flight, using the emergency hydraulics system, and after landing in Shymkent, provided inaccurate information on the faulty operation of the forward landing gear to air traffic control,” the Aviation Administration reported.

In January, the regulator published the preliminary findings of an unannounced inspection of Bek Air aircraft, which had revealed serious violations. Inspectors discovered fuel leaks from aircraft motors and worn landing tyres. Several pieces of equipment were held in place by tape. Damage to aircraft was not reported in the relevant documents. Two Aviation Administration inspectors were later fired for failures of duty in the certification of the airliner.

Following receipt of the investigation’s findings, the management of Bek Air has 10 days to present the Aviation Administration with an action plan to address the reported shortcomings and infractions. If the infractions are not resolved within six months, the airline’s operational certificate and certificate of airworthiness will be withdrawn.

The validity of these two certificates was suspended following the 27 December 2019 crash of the airlines Fokker 100 aircraft just outside Almaty Airport. The plane lost altitude during take-off, smashed through the airport’s concrete perimeter wall and crashed into a two-storey building. 93 passengers, including three infants, and five crew members were on board the aircraft. 12 people died at the crash site, including the plane’s chief pilot Marat Muratbayev. One month later, co-pilot Mirzhan Muldakulov also passed away from his injuries.