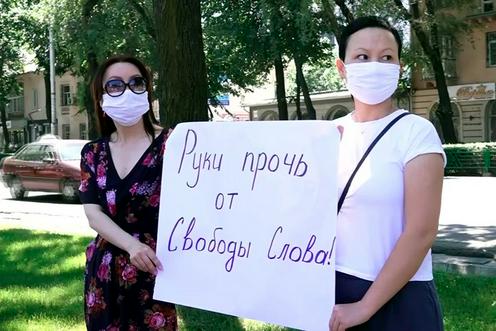 (Participants in a protest against the draft law on the maniplation of information. The sign reads: “Hands off of freedom of speech!”. Photo from Rus.azathabar.com

Kyrgyz president Sooronbay Jeenbekov has raised objections to the controversial bill “On the manipulation of information” and sent it back for further work, the press office of the head of state has announced (in Russian).

“I feel it is necessary to ensure that the law in question is reviewed from the point of view of human rights, government policy, technological capabilities and the stable development of the state,” Jeenbekov said while sending the bill back “in order to draw up an acceptable version”. Civil society representatives, legal experts and state officials should take part in reviewing the proposed law, the president has stated. Such a review is to focus on safeguarding rights and on “mechanisms of realisation and technical aspects of the regulation of the given law”.

At the same time, Jeenbekov said that he supports the “basic conception of the law in question – the necessity of defending the rights and freedoms of all against unreliable and false information spread on the internet”. He placed particular emphasis on the threat of false information about the coronavirus pandemic on social media to public health and social order.

The controversial draft law “On the manipulation of information” was approved by Kyrgyzstan’s Jogorku Kengesh (parliament) on 25 June. The law sets out the rights and duties of internet users, website owners and internet service providers. The bill makes it possible for the authorities to restrict access to block access to internet sites and shut down social media accounts without the need for a court decision. Internet users will also have to make their identity clear when using social media platforms, and creating anonymous accounts may be treated as a criminal offence. The bill further requires internet service providers to store user data, including photos, audio and video for six months and share that data with government agencies upon request.

According to the bill’s author, Gulshat Asylbaeva, current Kyrgyz legislation provides no means to control the publication of information on the internet and the new law is needed in order to protect the public from terrorist propaganda, violence, child pornography and disinformation.

A number of parliamentary deputies and social activists argued instead that the proposed law amounts to an attempt to introduce internet censorship. A petition against the law on the website Change.org has been signed by around 11,000 people. “Under the guise of a war on fake information, deputies want to exert strict control over the internet and social media. If the law enters into force then Kyrgyz citizens’ rights to free speech will be violated. It is our civic duty to prevent such arbitrary government,” the petition says.

Concerns about the law were also raised by lawyers at the Adilet legal clinic. The organisation’s legal experts argued that key terms (including that of “the manipulation of information”) are not defined in the text. Nor is any clear methodology set out according to which decisions on the unreliability of information are to be made, effectively leaving it up to the government to decide what is and is not false news. Adilet also stressed that introducing a ban on the distribution of false information is unnecessary since the issue is already sufficiently covered by existing Kyrgyz legislation – those cast in a negative light in published material have the option to file defamation charges in court.

“The vague nature of Kyrgyzstan’s proposed legislation on media manipulation is sure to create a climate of uncertainty for journalists and promote self-censorship,” the Committee to Protect Journalists has previously argued.